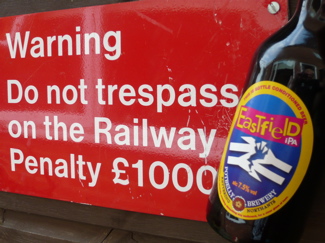 The preferential treatment and disproportionate interest given to people and the ins and outs of their lives just because they play in a pop group has always been a source of bewilderment. Does it really matter what someone's favourite colour is? The anti-hero stance of punk was great, but sadly a lot of punk rock literature comes across as Smash Hits for people with spiky hair. Eastfield exist as a counter-reaction to shoddy attitudes, rock star egos and placing of people on pedestals. We strive to be decent and down-to-earth while at the same time poking a bit of fun out of all the related crap that winds us up.

Lyrically, we punctuate socio-political comment with associated references from the world of adverts, 1970's TV programs, railways and first-hand experiences, making sure it always remains relevant (or not!). If used in the right context, humour can be a powerful weapon to use against and poke fun at the establishment. We don't actually set out to be specifically either humorous or 'political' but a mixture of both is surely a good thing, besides it reflects how we are as people. Musically we play 3 chord, sing-a-long, simple catchy songs. There has never been any attempt to copy anyone's style or stance - this would be totally pointless. Regardless of whether what we do is any good or not, it is better to be a first-rate Eastfield than an eighth-rate wannabe someone else. We have no pretensions that we are doing anything original, we do what we want and what we like to do.

Keeping integrity is quintessential for survival. Call it sheer bloody-mindedness but the fact that we can do it our way and it works is a reason to carry on in itself. If we were aspiring to be 'rock stars' or e.g. chasing that elusive 'record deal' then we would have got disheartened and split up years ago, but signing to a record label has always been irrelevant to what Eastfield do. Eastfield has always been more about lifestyle choice than just a band and the ethics of DIY are firmly ingrained in this. We don't need a record company, agent or manager to tell us what to do or how the band should be run. We make our own decisions and choices - if they work - great, if not - then we can learn from our mistakes. Printing t-shirts, designing record sleeves, flyers etc is evidently harder work but it's much more rewarding and it gives us more control over what we put out and what we do. Anyone that deals with Eastfield deals with us in person, which means that we get to know people face to face. These mutual relationships are what form the ethos of what we do. We have taught ourselves and learnt stuff that we have passed on. To do everything ourselves has been a conscientious decision of Eastfield from the start and we wouldn't want it any other way. This doesn't mean that DIY has to be inferior or not taken seriously - Eastfield produce good quality stuff at sensible and affordable prices which sells well and without ripping people off. Our stuff is properly pressed and the same quality that you get in the shops or big bands charging ridiculous prices for. However, we liaise with manufacturers direct, to cut out the unnecessary middleman/woman. We make a small profit on everything, but this goes back into the collective pot to help fund the day-to-day running of Eastfield whether it's recording, releasing, mending broken equipment or buying petrol to play benefit gigs. Everything is covered without anyone needing to dip into their own pockets but no one makes a living from Eastfield either. If we were doing it merely to line our pockets then there would simply be no point.

More importance is placed on the fact that things have ticked over nicely due to commitment, belief in what we're doing and a high degree of mutual co-operation with like-minded souls. We have no time for competition, one-upmanship and bickering especially when there are more important things to worry about in life. Favours breed favours but not necessarily in a tit-for-tat fashion, you soon discover who the good people are. It's deemed a success when we hear that we are frequently looked upon as the good guys and girls. In addition, we seem to sell our stuff, people come to our gigs and we constantly get to communicate and make new friends by meeting lots of top people on the way. We are chuffed that we have managed to do all this totally on our own terms, without shafting anyone else or selling ourselves in the process.

Back to Index Page

Created without the use of Mickeysoft 'Frontpage' or any similar programmes.